Here are tidbits, links, and other sundry items of interest:

This week’s show was the product of a lot of different moments of musical discovery. Here are the items mentioned on-air that I promised I would package up as “show notes” for easier post-show access. Enjoy!

After two weeks of using pretty heavily Apple’s new “Music” app/subscription service on both mobile devices and desktop computers, I shared on-air my overall satisfaction with the apps ability via the robust “For You” feature to push and suggest music based on my interests. It has enabled me to discover new artists, new genres in a way that I have not experienced to-date. There is a link on the Alloy website (see the sidebar of any page) to try out Apple Music. Give it a test drive and see what you think. Mileage, as they say, will vary depending on your tastes, etc. It does require the latest version of the iOS software (version 8.4) and/or the latest version of the desktop operating system (version 10.10.4), and the latest version of iTunes to get the full feature set. The sample image below shows just a small set of the overall playlists that were suggested to me at one point in the last week by the very cool “For You” feature. I was pleasantly surprised to see a totally appropriate and unique drum-centered list, the “Unbelievable Jazz Drum Solos” playlist, as well as Miles’ electric tracks collected into a nice playlist. My appreciation for ambient and off-the-beaten path music is also represented in the “Contemporary Psych Gems.” Impressive. 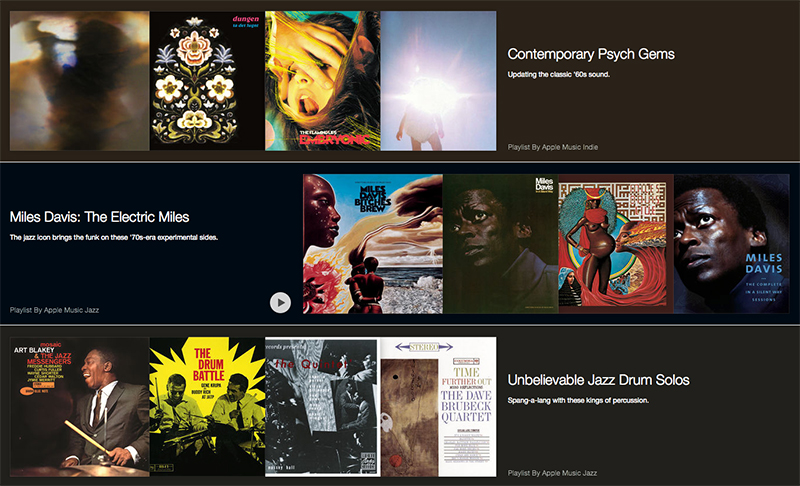 As part of today’s “Baltimore” theme, I played the track “I Have the Room Above Her” that featured Baltimore-born guitarist, Bill Frisell, saxophonist Joe Lovano and drummer Paul Motion. Great track, great album. Sadly, Paul Motion is no longer with us. This past week I discovered a podcast dedicated to illuminating the vast musical archive of Paul Motian. The podcast, simply titled, “Uncle Paul’s Closet” is truly a labor of love created and managed by his niece. There is a website devoted to the archive and it is found here. Lastly, if you want to listen to it in true radio form, you can catch the radio broadcast three Fridays a month on WRFR a freeform radio station broadcasting out of Rockland, ME.

I played “Lionsong” a track from Bjork’s latest release, “Vulnicura.” I was inspired to play it this week after reading an article by Jenny Hval on the fantastic site, and equally fantastic podcast, Talkhouse.

The quote from the article that I shared on-air was this one (very insightful, I thought):

Here’s my theory: when we say, “it’s too private,” we mean, “I don’t want to go there.” When we say something is indulgent, we really mean, “I might be like that, and it frightens me.” When we say we want Björk to make an “accessible” album, we’re making rules that she never cared about when we thought she actually was making accessible albums. When we say something sounds like Björk, we’re saying, “I don’t really want to explain what it sounds like or give it any other value whatsoever.” Everything is a placeholder. Placeholders keep their distance.

Finally, at the very end of the show I snuck in a track from Billy Martin’s, “Wandering”, the lovely “Coral Sea (piano).” Billy is the drummer of Medeski, Martin and Wood (MMW) whose music has been featured numerous times on Alloy. I learned this week that Billy was holding a combination residency and gallery-like music performance at the Drawing Center in NYC--here is the info about the event. Much of the music performed, at least as I understand it at this point, was played by interpreting Billy’s graphical scores (see the photos at the bottom of the Drawing Center page). Dickinson’s own Elisabeth Stimpert as part of Alarm Will Sound, participated in the event. I look forward to playing more tracks from “Wandering” (highly recommended) and learning more about this event. Stay tuned...