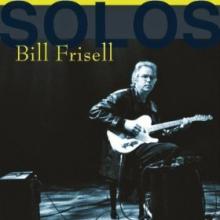 January's "Alloy Recommendation" is not a "new" album or release. If you are a frequent listener to "Alloy" you are already familiar with my appreciation of jazz guitarist, Bill Frisell. Over the holidays I found myself drifting back into my Bill Frisell library, as I so often seem to do, and focused intensely on this month's recommendation, Frisell's "Solos: The Jazz Sessions." Why? For at least two reasons.

First off, it is simply a man and his guitar...well, a guitar plus Bill's beautiful, ethereal, layered guitar effects, of which he is a tasteful master. Though his ethereal guitar loops, echoes, and delays create the illusion there is more than one musician in the room there are no supporting musicians on this album. You might be thinking, "Oh, man...one guitar...BORING!" I must admit, one-guitar albums can, at times, be very dry, unexciting, and mathematical when not at the hands of an artist who is melodically sensitive and sonically experimental. I do not find this album boring. Not at all. From the other-worldly rendition of "Shenandoah" to the edgy, bluesy interpretation of the Dylan classic, "Masters of War" there is so much to enjoy on this session. Bill balances his clean guitar sound and his wondrous woven digital delays and textures through his electronic pedal-work so tastefully and artistically (listen to "Throughout/Ron Carter" [see below/YouTube] as another prime example) that I am forever hypnotized by his creativity, unique interpretations, and honesty. In short, I am spellbound every time I listen to this album. The more I listen to Bill Frisell's music the more I feel he is the today's guitar equivalent of Thelonious Monk. There is a sly (but musically true) playfulness, openness, and odd but "right-on" turn of phrase in his compositions that reminds me of Monk. Like Monk, he makes the melodically complex simple and approachable. Frisell consistently keeps his melodic approach clean, weaving single notes and spare chords across his musical canvas. Gorgeous and spot-on.

Which leads to the second reason to recommend this album. "Solos: The Jazz Sessions" is a fantastic primer to Frisell's larger music catalog. If you "get" this album--its weaving tapestry of lyrical melodies and textures, its simple and sublime atmospheric qualities--you will likely understand much of Bill's music featured on other albums. Because it is a solo album, it presents Frisell's musical ideas, vocabulary, and approach in an isolated and pure manner. Front and center. A man alone and under the musical microscope. Additionally, this album offers a nifty collection of a few short interviews with Bill woven between a few of the songs providing a fantastic window into his thought process, respect for the creative process, and exposing his inherent gentleness as a human being.

One additional bonus about this collection: if you would rather "see and hear" instead of "hear only" this set of music, you are in luck. It was released as a DVD that captures all of the tracks "live" (in standard definition) as they were recorded at the Berkeley Church in Toronto, Canada on April 4, 2004. For those not wanting to spring for the DVD, most of the video has been broken up into segments (one sample below) and can be found on YouTube for free, but if you want the live theater feel, I encourage you to pick up a copy of the DVD. Finally, I can't wait for this movie/DVD to be released. As soon as I hear of a release date I will post it here.